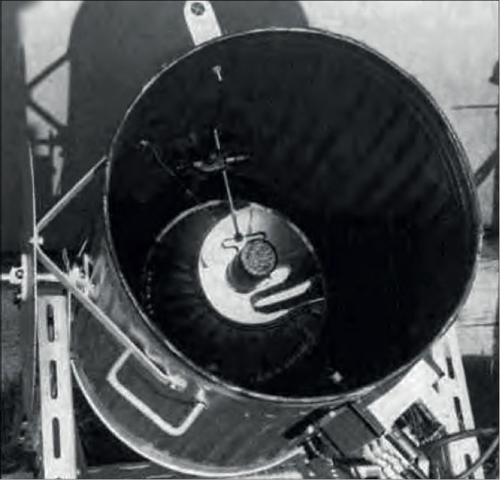 The detector used for the first observations of atmospheric-Cherenkov radiation: a dustbin with a small parabolic mirror and phototube (Image: G Hallewell)

In September 1952 a simple experiment allowed the first observation of Cherenkov light produced by cosmic rays passing through the atmosphere. This experiment birthed a new field of astronomy. In 1952 armed only with a rubbish bin painted black on the inside from the UK Atomic Energy Research Establishment at Harwell, a recycled 25 cm searchlight mirror and a 5 cm phototube, Bill Galbraith and his colleague John Jelley set out to measure flashes of Cherenkov light in the night sky. They observed a count rate of about one pulse per minute, which confirmed Patrick Blackett’s assertion that Cherenkov light from charged cosmic rays traversing the atmosphere should contribute to the overall night sky intensity. In 1953, with improved apparatus at the Pic du Midi, the pair successfully demonstrated that the light signals they recorded had the polarization and spectral distribution characteristic of Cherenkov radiation. These experiments also revealed the correlation of the amplitude of the light signal with shower energy. The first steps towards Cherenkov astronomy had been taken.