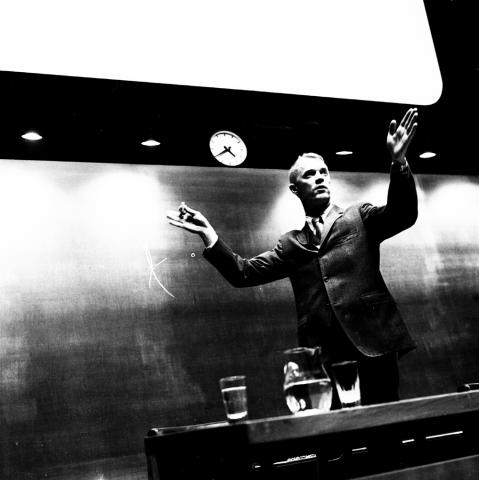 Astronaut Rusty Schweickart’s visit to CERN on 4 June 1969 was a big hit. The auditorium was packed, and his talk on The Flight of Apollo 9 and the Future of Space Exploration was screened to other equally crowded rooms around CERN. Just three months earlier he had been the Lunar Module pilot on the Apollo 9 mission, which carried out a series of tests in earth orbit paving the way for the landing of the first man on the moon on 20 July. The Lunar Excursion Module was the small spacecraft that would separate from the parent capsule in lunar orbit to carry two astronauts down to the surface of the moon and back.

In the two days following Rusty’s talk a further 1,250 people watched the Apollo 9 film, and Rusty was able to return incognito for a good look round CERN. More photos and an audio recording of part of the question and answer session are available if you’d like to know more.