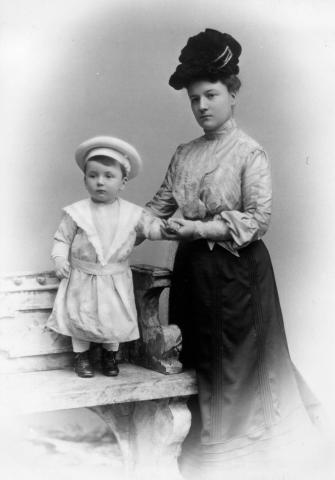 Bertha Camilla Schütz (known as Maria) was born in Vienna in 1878. A writer and journalist, she followed in her father’s footsteps as collaborator on the Neue Freie Presse, writing theatre reviews and historical essays. In 1899 she married Wolf Pauli and their first child was born on 25 April 1900. Wolfgang junior, seen here at the age of 20 months, grew up to be a Nobel prizewinning physicist, and his sister Hertha (1906-1973) became an actress and writer. Their mother was a pacifist, a socialist and a feminist, participating in the electoral campaign of 1919 to urge women to cast their newly won vote for the Social Democratic Party. She died (suicide) on 15 November 1927.