CERN is born, mother and child are doing well 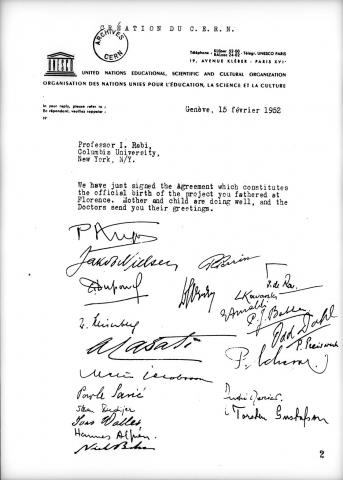 “We have just signed the Agreement which constitutes the official birth of the project you fathered at Florence. Mother and child are doing well, and the doctors send you their greetings.” This was the message sent to Isidor Rabi on 15 Feb 1952 by the signatories of an agreement establishing the provisional European Council for Nuclear Research.

Scientists and politicians had been pressing for the creation of a European laboratory to pool resources depleted after World War Two, and Nobel laureate Rabi added his support at the fifth UNESCO General Conference (Florence, June 1950), where he tabled a resolution to “assist and encourage the formation of regional research centres and laboratories in order to increase and make more fruitful the international collaboration of scientists…”

The first resolution concerning the establishment of a European Council for Nuclear Research was adopted at an intergovernmental meeting of UNESCO in Paris in December 1951. The provisional Council, set up in 1952, was dissolved when the European Organization for Nuclear Research officially came into being in 1954, though the acronym CERN (Conseil Européen pour la Recherche Nucléaire) was retained.