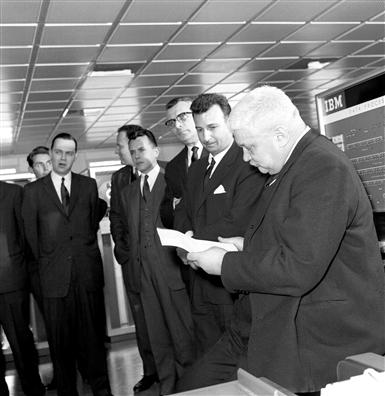 The IBM 709 arrived at CERN toward the end of 1960. It was inaugurated at an official ceremony on 6 March that year, where computer engineer Lew Kowarski delivered a speech (see image).

With Mercury and the 709 operating together, CERN had its first experience of compatibility problems. This was a continuing source of difficulty as various different computers came into operation at CERN.  Many of CERN's programs were also used on a range of computers in its 13 member states.

A high-level computer-programming language called "FORTRAN" (short for "FORmula TRANSlating")that made its CERN debut with the 709, and this language quickly became the only programming language in general use at the laboratory. A new generation of programs, written in FORTRAN to exploit the greater speed of the IBM 709, were brought in to analyse measurements from bubble-chamber photographs.

The IBM 709 was a vacuum-tube machine with a core memory size of 32K 36-bit words. The central processing unit (CPU) was 4-5 times faster than that of the Mercury, but compiling a typical FORTRAN program could still take several minutes. Tape bins made way for card trays. As many as six peripheral devices could be attached via their controllers to data channels on the 709, to access core memory buffers while the CPU performed other work. The Direct Data Connection – an innovation of the machine – allowed for direct transmission of data from external equipment to memory via a channel. The speed was in principle up to 1 megabit per second.

After one year of experience, CERN added a small IBM 1401 to speed up the input/output, job sequencing and operations. The concept of SPOOLing (Simultaneous Peripheral Operation On-Line) with its 1/0 files (virtual reader/printer) has its origins in the days of 709 operations.