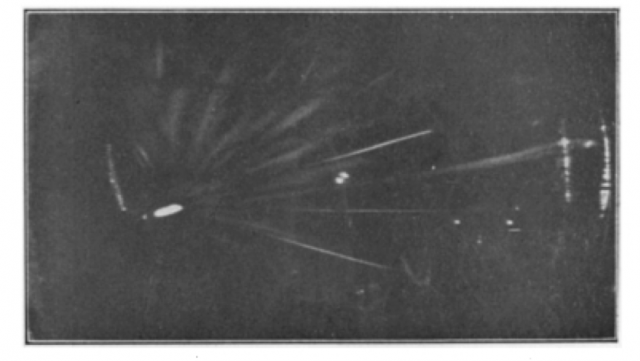 Cloud formed on ions due to α-Rays (Image: CTR Wilson Roy, Proceedings of the Royal Society A, Volume 85, Plate 9)

The cloud chamber was fundamental in the history of particle physics and cosmic rays. This device made it possible to record individual charged particles in the secondary particle showers that are initiated when cosmic rays strike particles in the upper atmosphere. Wilson won the 1927 Nobel Prize for his development of the cloud chamber, which he originally undertook to study atmospheric phenomena. In April 1911 he presented his first rough photographs of particle tracks at the Royal Society in London.

A cloud chamber is a box containing a supersaturated vapor. As charged particles pass through, they ionize the vapor, which condenses to form droplets on the ions. The tracks of the particles become visible as trails of droplets, which can be photographed. During the first half of the 20th century, experiments that looked at cosmic rays passing through cloud chambers revealed the existence of several fundamental particles, including the positron, the muon and the first strange particles.