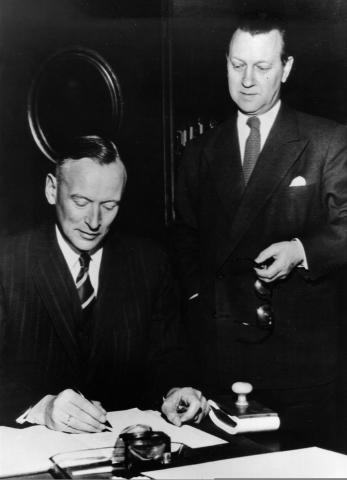 During the construction of CERN in the 1950s, most staff were lodged in temporary offices nearby.  But the theoretical physics group (one of three study groups set up in 1952 as part of the ‘provisional CERN’) began life at the Theoretical Physics Institute, University of Copenhagen.  Niels Bohr led the group until September 1954, then handed over to Christian Møller. The photo shows CERN’s Director General Cornelius Bakker signing an agreement on the legal status of the group in Denmark in 1956.

It was always intended that the group would relocate back to the main CERN site over a period of five years, and the first theorists came to Geneva in 1954. They were based first at the University of Geneva, then in barracks near the airport, before finally moving to the new site in Meyrin. The Theory Group in Copenhagen officially closed on 1 October 1957.