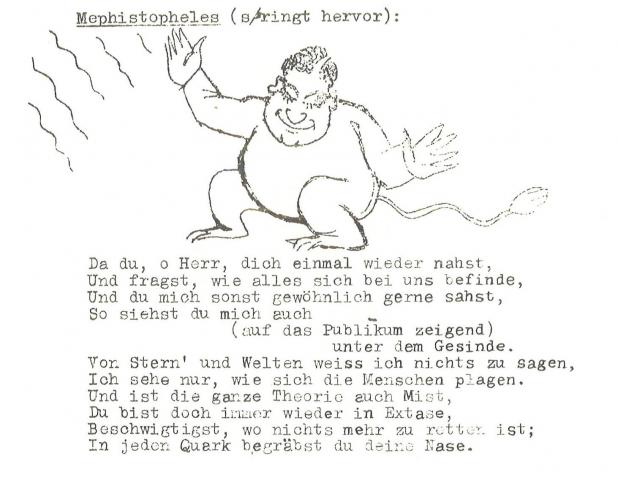 Among the scientific documents in CERN’s Wolfgang Pauli Archive is a rather unusual item – a copy of the script parodying Goethe’s Faust performed at the Niels Bohr Institute conference, 3-13 April 1932 (exact date of performance not known). Written mostly by Max Delbrück, and decorated with caricatures of the protagonists, the skit features Pauli (Mephistopheles) trying to sell the idea of the neutrino (Gretchen) to a sceptical Paul Ehrenfest (Faust)!

Pauli had postulated the existence of this weightless particle in his famous letter to the ‘Dear radioactive ladies and gentlemen’ at the Tübingen conference in December 1930, but he had to wait until 1956 for experimental confirmation by Reines and Cowan, so in 1932 it was still the subject of debate. Pauli’s reputation for sharp wit made him ideal for his satanic rôle, but in his absence the part was played by Léon Rosenfeld. The rôle of God was assigned to Bohr. The script (in German), can be seen here. An English translation is given in George Gamow’s Thirty Years that Shook Physics.