Fast ejection of protons from the PS 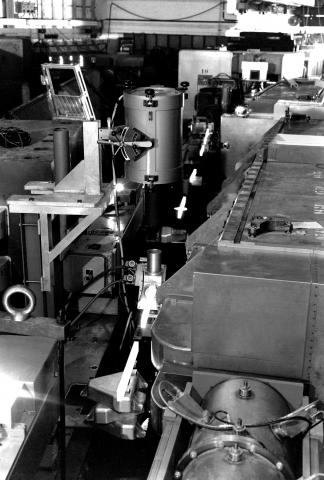 This remarkable photo, used on the cover of the May 1963 CERN Courier, captures the passage of protons extracted from CERN’s Proton Synchrotron (PS).

Initially, the PS had operated with internal targets, but when a beam of higher intensity was needed the fast ejection system was developed to eject the beam towards external targets. During the afternoon of Sunday 12 May 1963 the PS became the source of the world's first beam of 25 GeV protons to travel freely in air.

This photo was taken the following day by members of CERN’s Public Information Office. They placed blocks of plastic scintillator along the path of the beam and set up a camera to record the effect. As expected, the scintillators glowed brightly as the beam passed through them.

You can read more in the May and June 1963 editions of the CERN Courier, and there are more photos here.