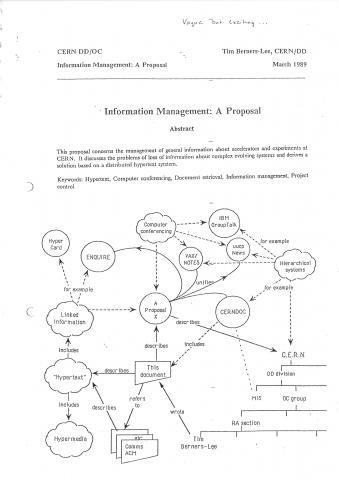 Tim Berners-Lee made a first proposal for information management at CERN in March 1989 (no exact date is given). A later version was written in 1990, but this early document is particularly interesting because it includes annotations by his boss, Mike Sendall, whose general comment was ‘Vague but exciting…’! The project eventually grew to become the World Wide Web.

In this document Berners-Lee outlined the problems of losing information at CERN, the advantages of linked information and hypertext and the practical requirements of his idea. He proposed ‘a universal linked information system, in which generality and portability are more important than fancy graphics techniques and complex extra facilities. The aim of the project would be to allow a place to be found for putting any information or reference which one felt was important, and a way of finding it afterwards.’ With the help of Robert Cailliau and others he was able to make the dream a reality.