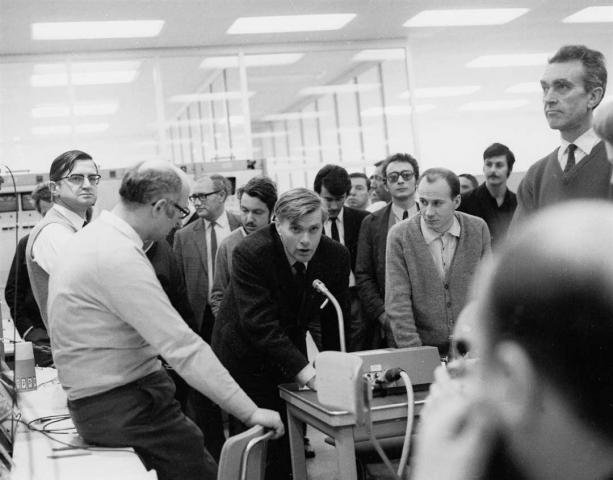 By the late 1950s, physicists knew that a huge gain in collision energy would come from colliding particle beams head on, rather than by using a single beam and a stationary target. At CERN, accelerator experts conceived the idea to use the Proton Synchrotron (PS) to feed two interconnected rings where two intense proton beams could be built up and then made to collide. The project for the Intersecting Storage Rings (ISR) was formally approved in 1965.

On 27 January 1971 Kjell Johnsen (pictured), who led the construction team for the Intersecting Storage Rings (ISR), announced that the world's first interactions from colliding protons had been recorded. Pictured on the left are Franco Bonaudi, who was responsible for the civil engineering and Dirk Neet, who later took charge of ISR operations.

For the next 13 years the machine provided a unique view of the minuscule world of particle physics. It also allowed CERN to gain valuable knowledge and expertise for subsequent colliding-beam projects, and ultimately the Large Hadron Collider. For example, it was here that Simon van der Meer’s ideas to produce intense beams by a process called "stochastic cooling" were first demonstrated.