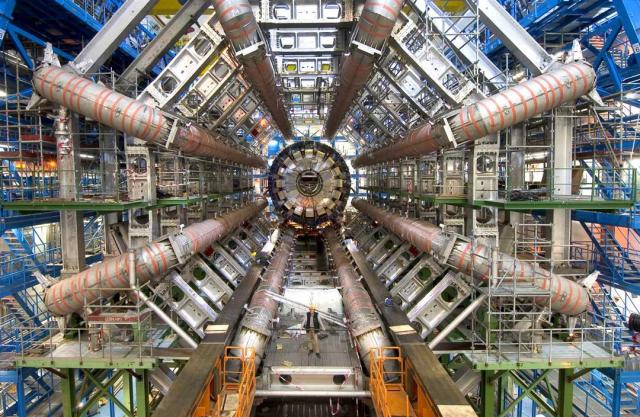 The ATLAS Barrel Toroid, then the largest superconducting magnet ever built, was switched on for the first time at CERN on 20 November 2006. The magnet is called the Barrel Toroid because of its barrel-like shape.

It provides a powerful magnetic field for ATLAS, one of the major particle detectors taking data at the Large Hadron Collider (LHC). The magnet consists of eight superconducting coils, each in the shape of a round-cornered rectangle, 5 metres wide, 25m long and weighing 100 tonnes, all aligned to millimetre precision.

The ATLAS Barrel Toroid was cooled down over a six-week period from July to August 2006 to reach –269°C . It was then powered up step-by-step to higher and higher currents, reaching 21 thousand amps for the first time during the night of 9 November. Afterwards, the current was switched off and the stored magnetic energy of 1.1 GigaJoules, the equivalent of about 10,000 cars travelling at 70 kilometres per hour, was safely dissipated, raising the cold mass of the magnet to –218°C.