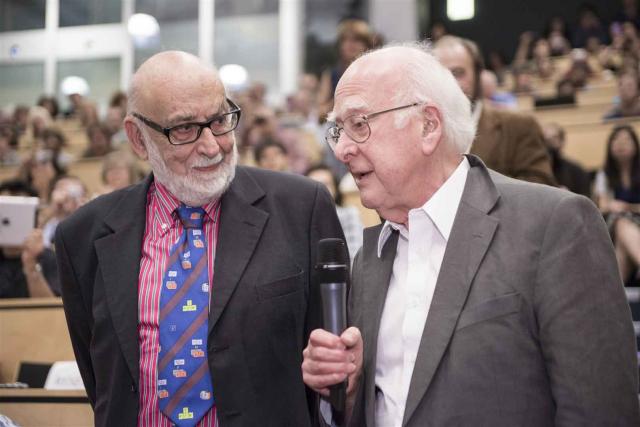 François Englert (left) and Peter Higgs at CERN on 4 July 2012, on the occasion of the announcement of the discovery of a Higgs boson by the ATLAS and CMS experiments (Image: Maximilien Brice/CERN)

On 8 October 2013, CERN congratulates François Englert and Peter W. Higgs on the award of the Nobel Prize in physics “for the theoretical discovery of a mechanism that contributes to our understanding of the origin of mass of subatomic particles, and which recently was confirmed through the discovery of the predicted fundamental particle, by the ATLAS and CMS experiments at CERN’s Large Hadron Collider.”

The Brout-Englert-Higgs (BEH) mechanism was first proposed in 1964 in two independently published papers: the first by Belgian physicists Robert Brout and François Englert, and the second by British physicist Peter Higgs. It explains how the force responsible for beta decay is much weaker than electromagnetism, but is better known as the mechanism that endows fundamental particles with mass. A third paper, published by Americans Gerald Guralnik and Carl Hagen with their British colleague Tom Kibble further contributed to the development of the new idea, which now forms an essential part of the Standard Model of particle physics. As was pointed out by Higgs, a key prediction of the idea is the existence of a massive boson of a new type, which was discovered by the ATLAS and CMS experiments at CERN in 2012.