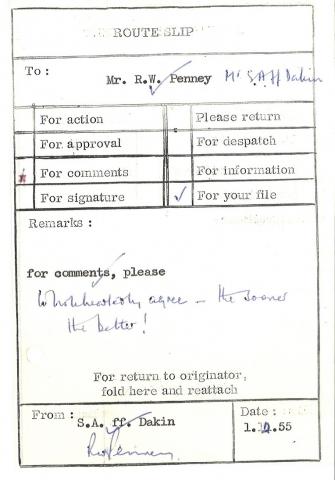 “Wholeheartedly agree – the sooner the better!” – CERN’s personnel officer was enthusiastic about the idea of creating a Staff Association in 1955. The Director of Administration, Sam Dakin, was similarly encouraging, writing to the Director-General: “Very often I am conscious that in attempting to judge the needs and wishes of the staff, we have to rely on ordinary gossip and that for official comments we have only those of Divisional Directors who may not always accurately know or represent the feeling of their staff. […] In such matters as, for instance, the health insurance, scales of pay, annual leave and so on, I should feel much better satisfied that we were adapting our policy to meet the real needs of the case if we have discussed it with the staff representatives as well as with the Directors.” (You can read the letters here.)

The Association held its inaugural meeting in the large lecture theatre of Geneva’s Institut de Physique at 6.15pm on Wednesday 11 May 1955. The rules and statutes were approved at this meeting and the President (A. Sarazin) and Committee members were elected over the next few weeks.