Inauguration of the IBM 709 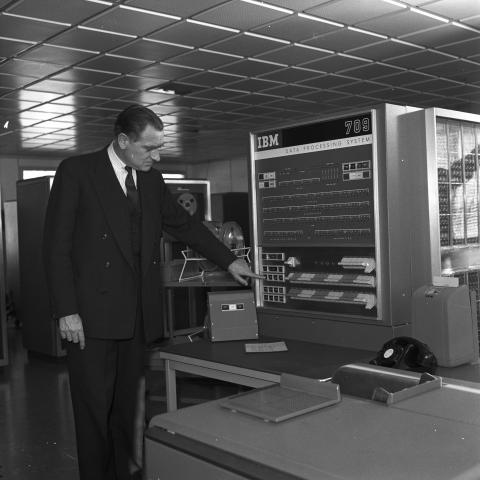 On 6 March 1961 François de Rose pressed the button to run the first program on CERN’s new IBM 709.  The existing Ferranti Mercury computer had been working at full stretch, but increasing user demand left CERN with a backlog of computing work by the end of 1959. A larger and faster machine was essential, though with the two operating together CERN soon got its first taste of compatibility problems.

Planning the inauguration of the IBM required a certain delicacy. CERN’s choice of an American computer over European ones had provoked some grumbling, and it was also important that no major Swiss academic institution was overlooked when issuing the invitations. There had been discussion of “a press conference when we could provide a reasonable number of journalists with information and, since this seemed to be required, drinks”, but in the end CERN provided facilities for a press gathering but let IBM organize this themselves. The inauguration remained a more scholarly affair; guests were treated to lunch, speeches, and a CERN visit – and a short musical performance by the new computer.