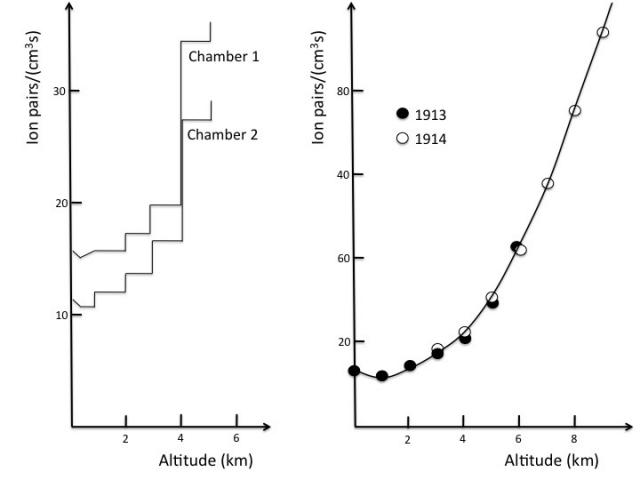 Increase in ionization with height measured by Hess and Kolhörster (Image: Wikimedia Commons)

German physicist Werner Kolhörster took balloon measurements up to a height of 9300 m, confirming Hess’s results for greater heights. His results confirmed unambiguously that an unknown radiation with an extreme penetrating power was causing ionization. The intensity of the radiation was relatively constant, with no day-night or weather-dependent variations.

In 1913 Kolhörster made three balloon flights, reaching 6200 m on the third flight. In 1914 he reached an altitude of 9300 m where he found the ionization was nine times the value on the ground. Kolhörster’s final flight on 28 June 1914 was the same day as the assassination of Franz Ferdinand and the beginning of the First World War. Research on cosmic rays ceased during the war as scientists became involved in other duties and only resumed in the early 1920’s.