Laying the foundation stone of CERN 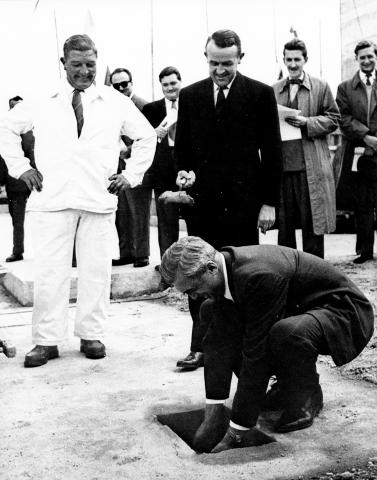 “On this tenth day of June, one thousand nine hundred and fifty five, on ground generously given by the Republic and Canton of Geneva, was laid the foundation stone of the buildings of the headquarters and the laboratories of the European Organization for Nuclear Research, the first European institution devoted to co-operative research for the advancement of pure science”

The stone was laid by the organization’s first Director-General, Felix Bloch, and speeches referred to the challenge of setting up the new laboratory, the cooperation and goodwill that had made it possible and a vision for the future.  The headquarters agreement with the Swiss Federation was signed the following morning, and in the afternoon the grounds of CERN were thrown open to the public. Construction had started long before the foundation stone, of course, so there was already plenty for visitors to see, and staff were on hand to act as guides. Want to know more? The commemorative booklet for the Foundation Stone Ceremony and the Open Day flyer are available here.