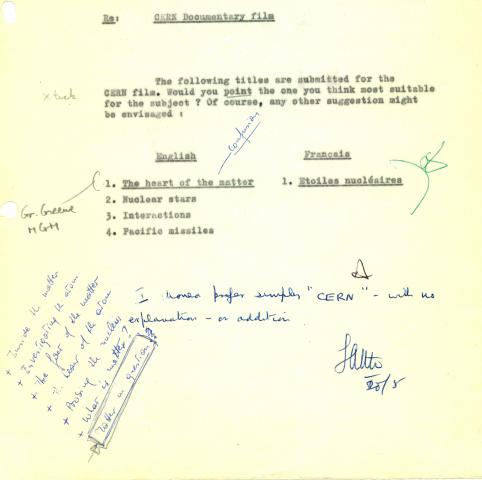 If you’re not ready to start the New Year yet, how about a trip back in time instead? In January 1961 staff were invited to watch CERN’s first documentary film.

CERN was of growing interest to journalists, including those in ‘the field of television and moving pictures, news and featurial films’, and by the end of 1958 the organization decided it was time to make a film of its own. The contract was awarded to Georges Pessis in May, and filming soon began. A team of CERN advisors carefully considered all aspects of the work, including what it should be called. After some brainstorming they settled on Matter in Question for the English version. The first private viewing took place on 12 July 1960; the head of the Public Information Service told Pessis that the photography had been very favourably received, and no one had been too critical of the music – possibly jazz wasn’t to everyone’s taste.