No parking problems with a palanquin 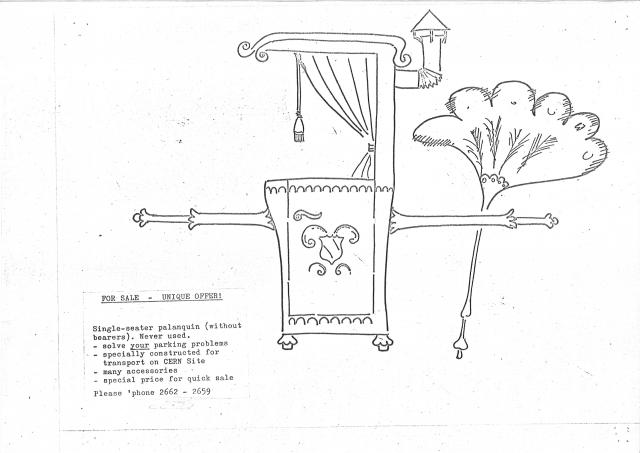 A suggestion to ease parking problems on the CERN site by allocating spaces didn’t go down well in 1965. Possibly the priority given to senior staff, and remarks about the benefits of an invigorating walk, gave offence. In any case, an alternative was proposed:

‘May I suggest instead that “senior administrators, division leaders" and the like, be provided with sedan-chairs or palanquins, in which they could be transported swiftly and effortlessly from corner to corner of the site. Other members of the staff would of course function as bearers. This would not only provide them with invigorating exercise, but also inculcate a due sense of their social position.’

A worried prospective bearer suggested motor scooters, as used by nuns on the wards of an Illinois hospital, instead. To prevent congestion indoors, use of the corridors could be limited to senior staff. Other people would get from office to office via the window ledges, not only enjoying healthful exercise but also freeing up more parking spaces as staffing levels gradually decreased when they fell off. The suggestion does not seem to have been adopted, but remains on file.