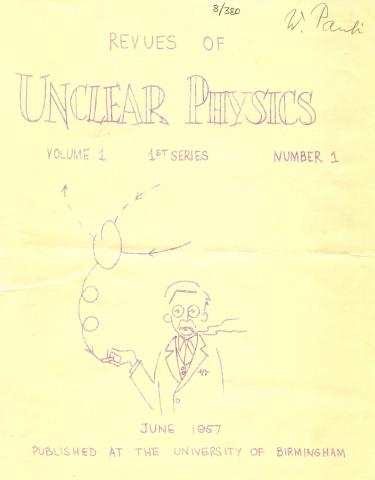 In June 1957, V. F. Weisskopf proudly announced acquisition of an instrument with unique possibilities - an intricate mechanism for testing complicated physics theories and producing new ideas. But it required careful handling! Inexperienced operators testing a theory would often see no reaction at first, or just hear faint noises reminiscent of German expressions such as “Ganz dumm” and “Sind sie noch immer da?” It was rather bulky, almost spherical in shape, and very much dependent on the correct fuel supply. Weisskopf said that, for reasons not yet fully understood, nobody had been able to make the machine work before noon.

In fact, Wolfgang Pauli had been acquired as a professor at the ETH Zürich in 1928, but a footnote explained that the paper had been classified since 1932, and partial publication was only now permitted since the U.S.S.R. had succeeded in building a similar gadget with a radius 1.5 times larger than the original model.

You can read the full report here (p.9) along with other fascinating articles in the spoof Revues of Unclear Physics, published at the University of Birmingham to celebrate the 50th birthday of R. E. Peierls.