Pauli travels to Sweden to receive the Nobel prize 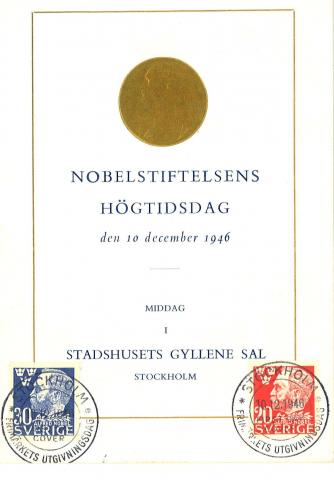 The date on this menu for Wolfgang Pauli’s Nobel prize festivities is 1946, yet he was awarded the  physics prize for his exclusion principle in 1945. In a letter to Niels Bohr (25 November 1945) he explains the delay:

“Dear Bohr! It was a great exciting surprise that the Nobel prize was awarded to me this year although I had thought already a week earlier, when the congratulation telegramm of you and your wife arrived, that it was a good omen …  The decision, whether or not I should go to Stockholm on December 10 was really not easy. The American authorities kindly offered me exit and re-enter permits for a trip to Stockholm and back for this very particular purpose. Considering all circumstances of the present situation, particularly the possibility of a delay by such a trip of my getting naturalized, I finally decided to postpone my participation in the ceremony in Stockholm to next year after having heard that Stern and Rabi are doing the same…”

Pauli was working in the USA during the war, and US naturalization was particularly important to him because his application for Swiss nationality had been turned down in 1938 and was not granted until 1949.