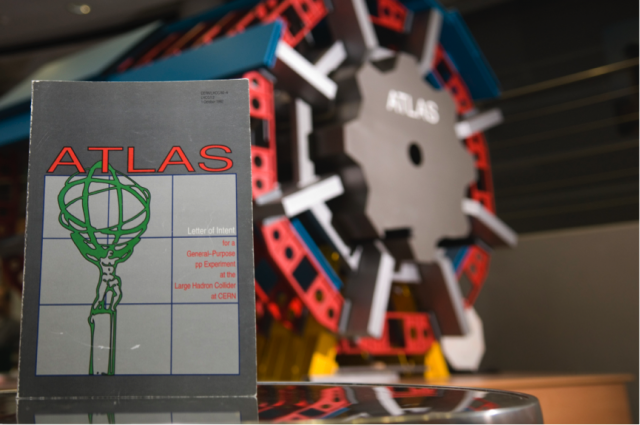 The ATLAS Collaboration proposes the construction of a general-purpose detector at the Large Hadron Collider. The Letter of Intent was submitted to the LHC Experiments Committee, which marked the first official use of the name ATLAS. The Letter identified a number of conceptual and technical design options, including a superconducting toroid magnet system.
15 December 1994

The ATLAS Collaboration submits the technical proposal of the experiment to the LHC Experiments Committee. Approval to proceed with technical design reports would be granted in early 1996, followed by the submission of the first report on 15 December of the same year. A long series of Technical Design Reports follow.
01 July 1997

The LHC Experiments Committee and CERN Director-General, Chris Llewellyn Smith, approve the construction of the ATLAS detector. As the first Technical Design Reports are approved, ATLAS teams all over the world begin building detector components and worked on final technical developments.
01 May 1998 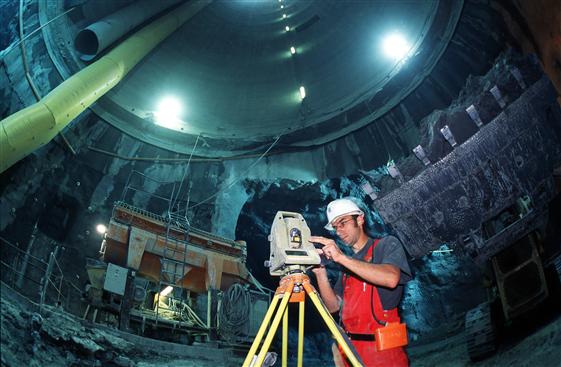 Team of engineers begin excavating a series of underground caverns in Meyrin, Switzerland. These caverns will be home to the ATLAS Experiment and its supporting infrastructure.
04 June 2003 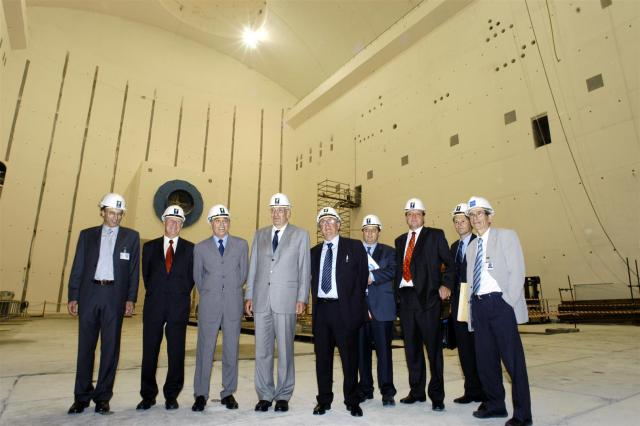 After five years of innovative and ingenious civil engineering, the ATLAS detector cavern (35 x 55 x 40 metres) was fully excavated. ATLAS, CERN officials, and political authorities, including the President of the Swiss Confederation Pascal Couchepin, celebrated the inauguration of the first cavern on the Large Hadron Collider on 4 June 2003. Installation of the detector in the cavern began soon after.
20 November 2006 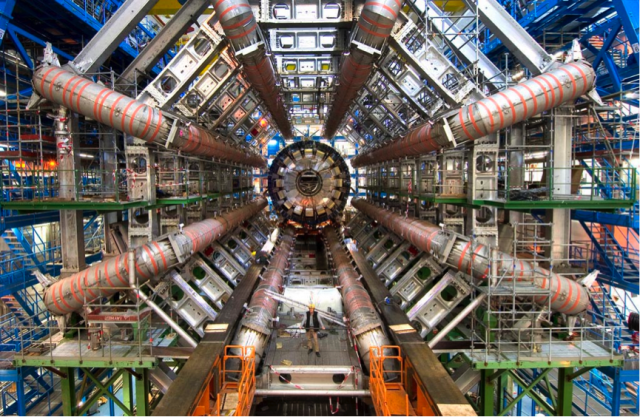 The ATLAS detector under construction in 2005. © CERN

The ATLAS Barrel Toroid, a characteristic component of the detector, then the largest superconducting magnet ever built, is switched on for the first time. It works together with the two Endcap Toroids and a central Solenoid magnet to bend the paths of charged particles produced in collisions at the LHC, enabling important properties to be measured.
04 October 2008 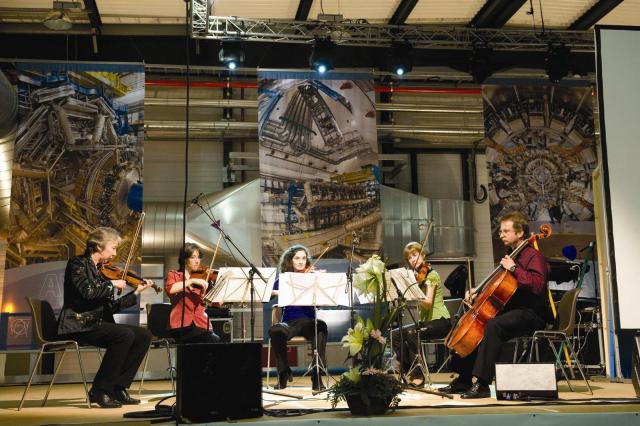 To celebrate the end of the ATLAS construction phase, the Collaboration hosts a party at CERN's magnet testing facility (SM18). This was the largest ATLAS celebration yet, with collaboration members travelling from around the world to mark this milestone.
23 November 2009

The start of a fantastic era of physics! ATLAS records first collisions at 0.9 TeV.
30 March 2010

ATLAS records collisions at 7 TeV centre-of-mass energy for the first time. Particle physicists around the world anticipate a rich harvest of new physics as the LHC begins its first long run at an energy three and a half times higher than previously achieved at a particle accelerator. Explore the resources prepared for press.
25 November 2010

Only 3 weeks into its first LHC heavy-ion run, ATLAS observed an unexpectedly large imbalance of energy in pairs of jets created in lead-ion collisions at the LHC. This striking effect, which is not seen in proton–proton collisions, could be a sign of strong interactions between jets and a hot, dense medium (quark-gluon plasma) formed by the colliding ions. Details studies of the effect followed this first observation.
08 December 2010

The ATLAS Experiment observes the production of top quark pairs – a major milestone of the early LHC physics programme. As the heaviest known elementary particle with a strong coupling to the Higgs boson, the top quark is key to understanding physics at the energy frontier. As the LHC generates hundreds of millions of top quarks, the ATLAS Experiment is able to study the particle’s properties in great detail.
04 July 2012

ATLAS and CMS observe a particle consistent with the Higgs boson

On 4 July 2012, as a curtain raiser to the year’s major particle physics conference, ICHEP 2012 in Melbourne, the ATLAS and CMS experiments present their latest preliminary results in the search for the long-sought Higgs particle. Both experiments have observed a new particle in the mass region around 125-126 GeV.  The next step is to determine the precise nature of the particle and its significance for our understanding of the universe. Are its properties as expected for the long-sought Higgs boson, the final missing ingredient in the Standard Model of particle physics? Or is it something more exotic? The Standard Model describes the fundamental particles from which we, and every visible thing in the universe, are made, and the forces acting between them. All the matter that we can see, however, appears to be no more than about 4% of the total. A more exotic version of the Higgs particle could be a bridge to understanding the 96% of the universe that remains obscure. Explore the resources prepared for press.
01 February 2013

Toward 14 Tev: preparing for increase in total energy 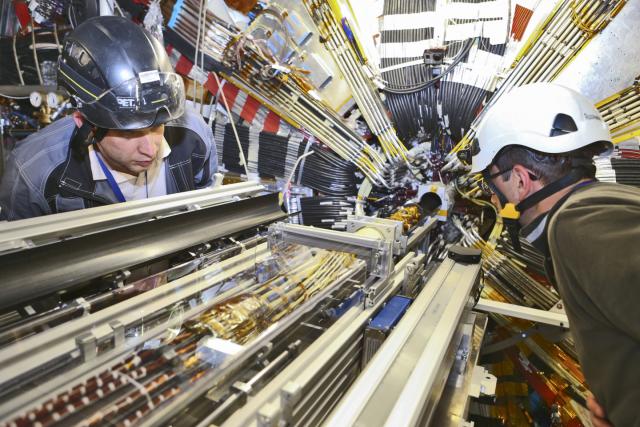 2014: Installation of the IBL during Long Shutdown 1. © CERN

Nobel Prize for the Higgs discovery

The 2013 Nobel Prize in physics is awarded to Professors François Englert and Peter Higgs "for the theoretical discovery of a mechanism that contributes to our understanding of the origin of mass of subatomic particles, and which recently was confirmed through the discovery of the predicted fundamental particle, by the ATLAS and CMS experiments at CERN’s Large Hadron Collider". ATLAS and CMS physicists cheered the announcement.
01 January 2014

Data-taking to continue until 2035 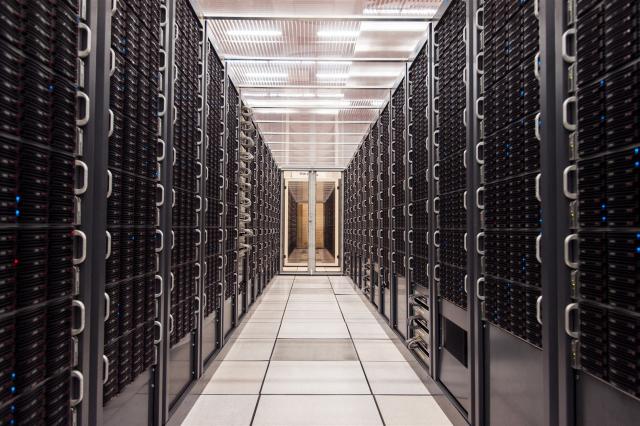 The LHC will be upgraded to 14 TeV collision energy. The first major upgrade is Phase I, scheduled for 2018, and Phase 2 in 2022. The experiments will continue taking data until 2035. By then ATLAS expects to have collected 100 times more data than they had at the beginning of Long Shutdown 1.
23 May 2014

ATLAS publishes first evidence for electroweak production of W bosons with the same charge. This channel receives contributions from quartic interactions between W bosons. This rare process gives physicists a new way to study electroweak symmetry breaking and to indirectly probe the properties of the Higgs boson.
03 June 2015

ATLAS began recording physics data from 13 TeV proton collisions, which allow for precision studies of the Higgs boson and other Standard Model particles, as well as the search for new particles with higher masses.
07 June 2016

The ATLAS and CMS Experiments release combined measurements of the Higgs boson production and decay rates. Examining all data from the LHC Run-1, the result gives a snapshot of the world’s knowledge of the mysterious Higgs boson. In addition to setting constraints on Higgs couplings to vector bosons and fermions, the combination established the observation of Higgs to di-tau decay and weak-boson-fusion production.
13 December 2016

First measurement of the W boson mass at the LHC

ATLAS shows its strength for precision physics, taking a world-class measurement of the W boson mass. Precise measurements of the W boson mass are vital, as the parameter is related in the Standard Model to the masses of the top quark and the Higgs boson. Measuring the W mass can thus test the self-consistency of the Standard Model, since any deviation from the predicted relation would be a sign of new physics. This first ATLAS result is consistent and as precise as the best previous measurement of the W mass.
01 April 2017 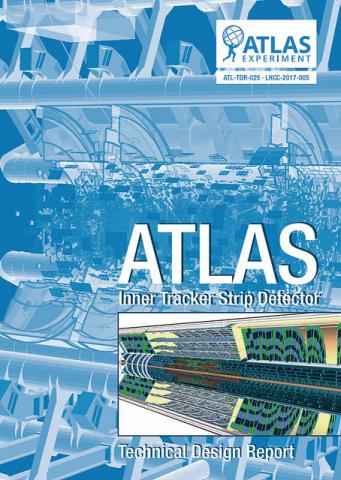 ATLAS begins preparations for the Phase II upgrade of the experiment, which will be in place for the High-Luminosity LHC. This upgraded ATLAS experiment will begin data taking in 2026.
06 June 2017

Sighting the Higgs in its favourite decay 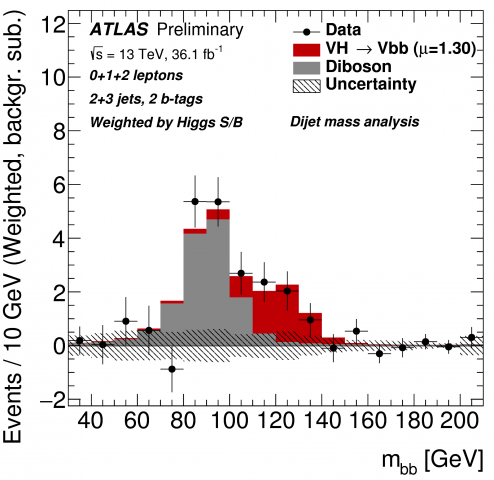 ATLAS sees the first LHC evidence of the Higgs boson decaying to a pair of b-quarks. Despite being the dominant Higgs decay, finding evidence in this channel was a major challenge. Following years of dedicated search, ATLAS was able to spot this elusive decay in 2017, with an observed significance of 3.6 σ (expectation 4.0 σ) when combining the Run 1 and Run 2 datasets.
14 August 2017

ATLAS publishes the first direct evidence of high energy light-by-light scattering, a very rare process in which two photons – particles of light – interact and change direction. The result, published in Nature Physics, confirms one of the oldest predictions of quantum electrodynamics.
04 June 2018

ATLAS announces the observation of Higgs bosons produced together with a top-quark pair. This rare process is one of the most sensitive tests of the Higgs mechanism and its observation marked a significant milestone for the field of High-Energy Physics.
28 August 2018

The Higgs boson is observed decaying into a pair of bottom quarks for the first time. This elusive interaction is predicted to make up almost 60% of the Higgs boson decays and is thus primarily responsible for the Higgs natural width.