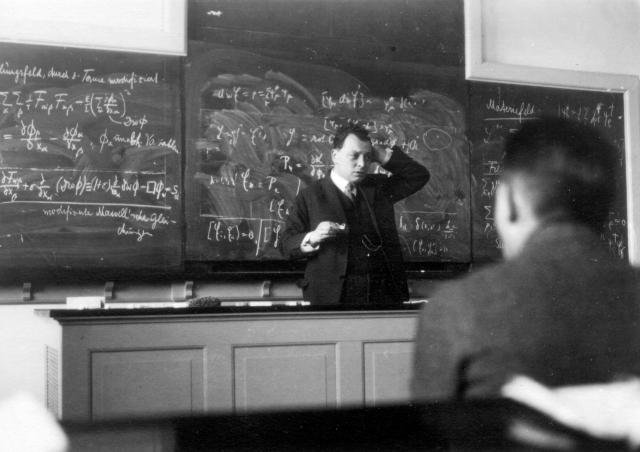 Despite some reservations about his lecturing style, Wolfgang Pauli was appointed professor of theoretical physics at the ETH, Zürich, on 10 January 1928. He started on 1 April at a basic annual salary of 15,000 francs.

Pauli’s lectures could sometimes be challenging. The equations in this photo  (taken in Copenhagen in 1929) look fairly legible, but K. Alex Müller recalls his habit of standing at the centre of the blackboard and writing equations around himself, almost in circles, rather than horizontally. Students in the ETH’s famous lecture room 6c tended to sit in two groups, to his left and his right, in order to be able to see round him! Markus Fierz considered Pauli the sort of teacher whose defect it is to think about their subject while lecturing; consequently, the listener participates in a sort of soliloquy which, since it is not really addressed to him, is sometimes barely intelligible. But - Fierz added - this taught the student, above all, to think critically about a theory.